Author: Gerald Lee
Open a larger version of the following image in a popup:
Share

Zhang Xiaoli’s studio is nestled in a village not far from the airport, tucked behind a BBQ restaurant named “Wang Xiaoshuai Kungfu Grill”, (which has nothing to do with the famous director). The innocuous studio and the flashy restaurant juxtapose one another as if to show the improbable relationship between this place and the art world. Zhang Xiaoli moved here four years ago. Apart from occasional greetings to neighboring artists, Zhang has spent the majority of her time in the sanctum of her studio, busy working. Today, young artists in Beijing no longer flock to the 798 Art District, where high rents and community provided a not easy threshold of success. Instead, emerging studios have sprung up on the outskirts of the city; with different studios scattered in all directions, and artists no longer depend on proximity to achieve success. 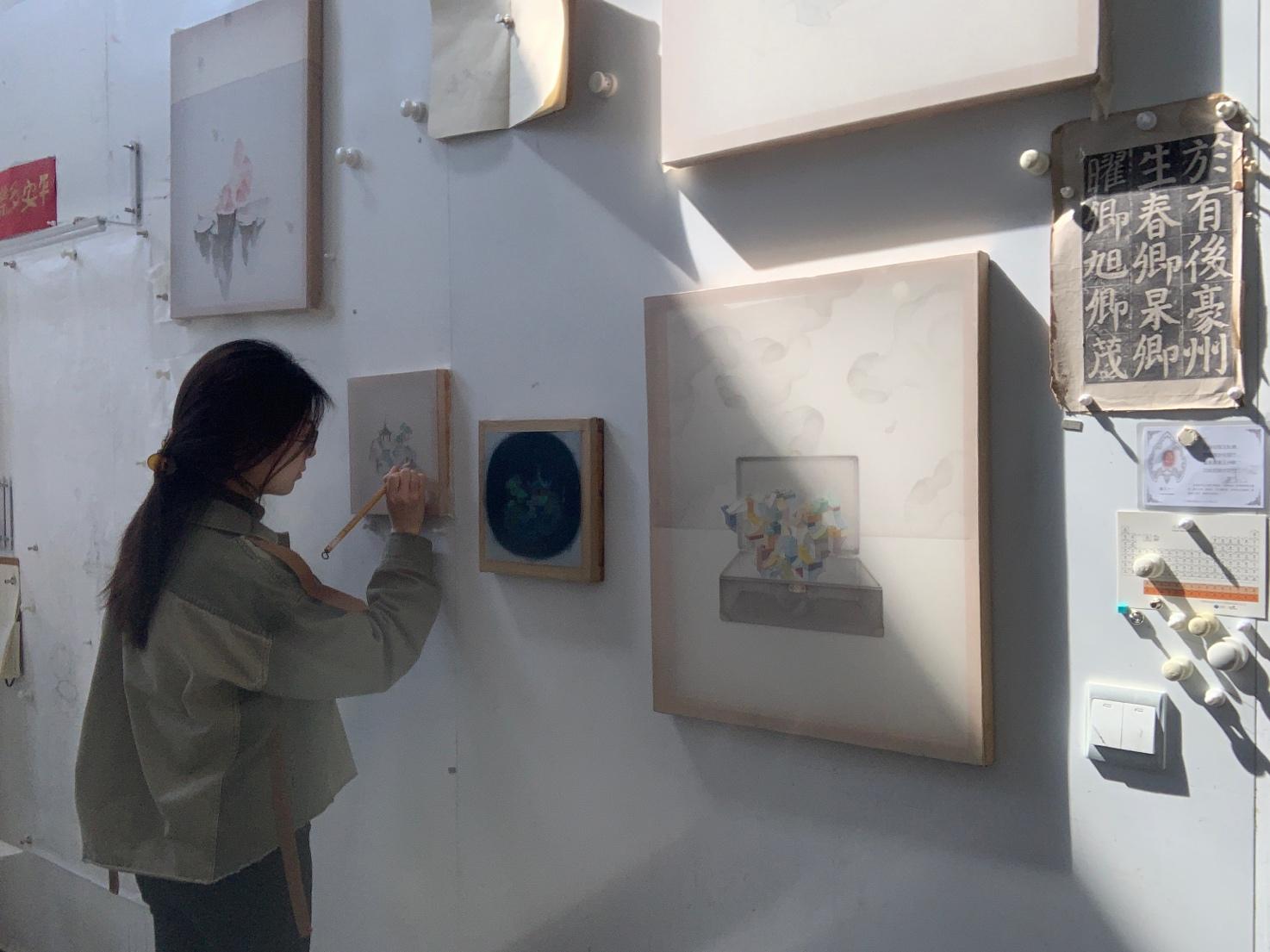 Zhang Xiaoli in studio, © courtsey of the artist


Zhang Xiaoli comes from a studious, semi-professional art background. Even before her junior year, she spent her time in a lab at the Chinese University of Hong Kong, bioengineering plants to make them taller and stronger. Later, she chose to study art, briefly renting a small studio in Songzhuang to work as a semi-professional artist. Her graduate studies at the Central Academy of Fine Arts allowed Zhang Xiaoli’s work to mature further. She is now showing her work across the ocean in New York, at Fu Qiumeng Fine Art’s summer show: The Rain Freshens. 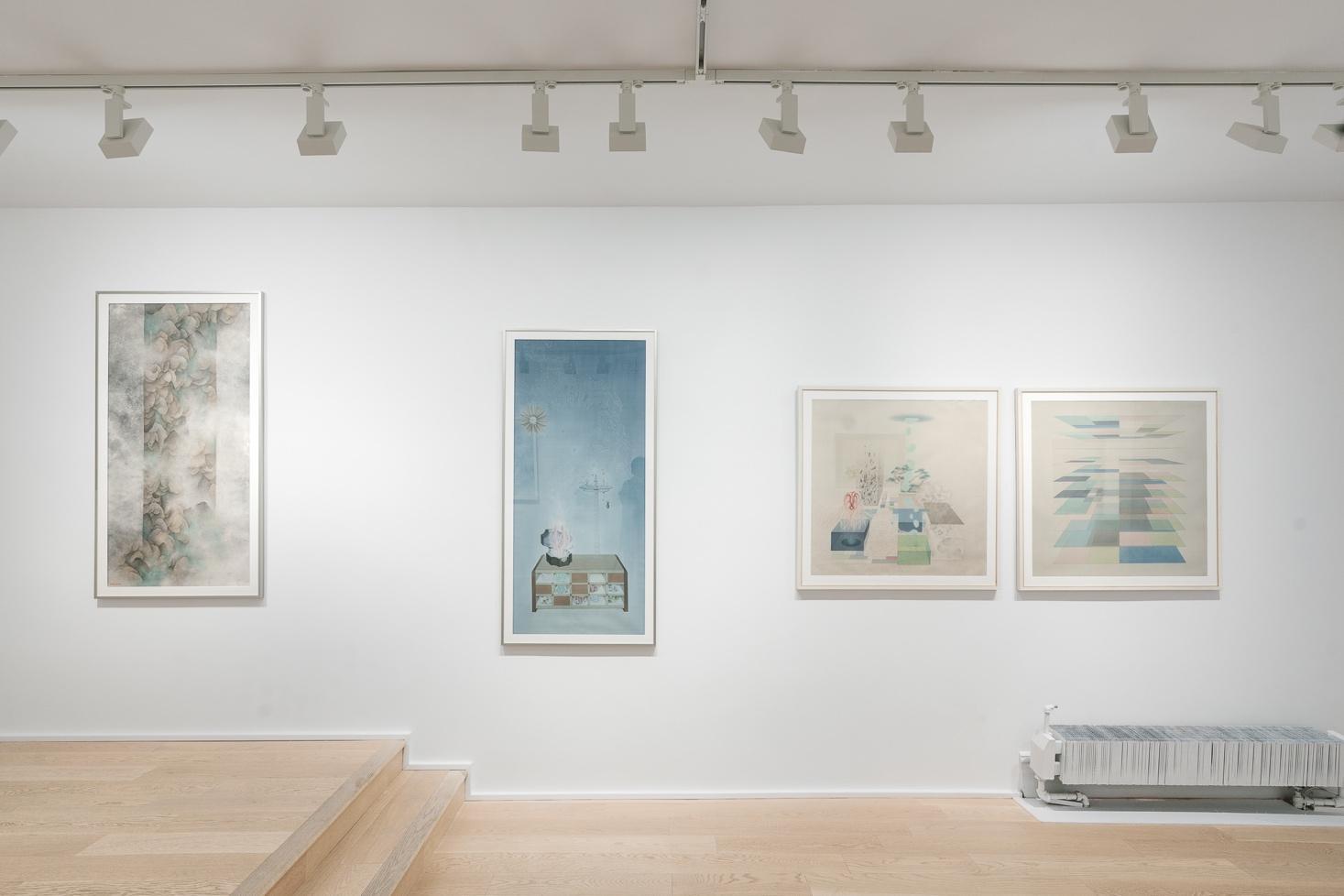 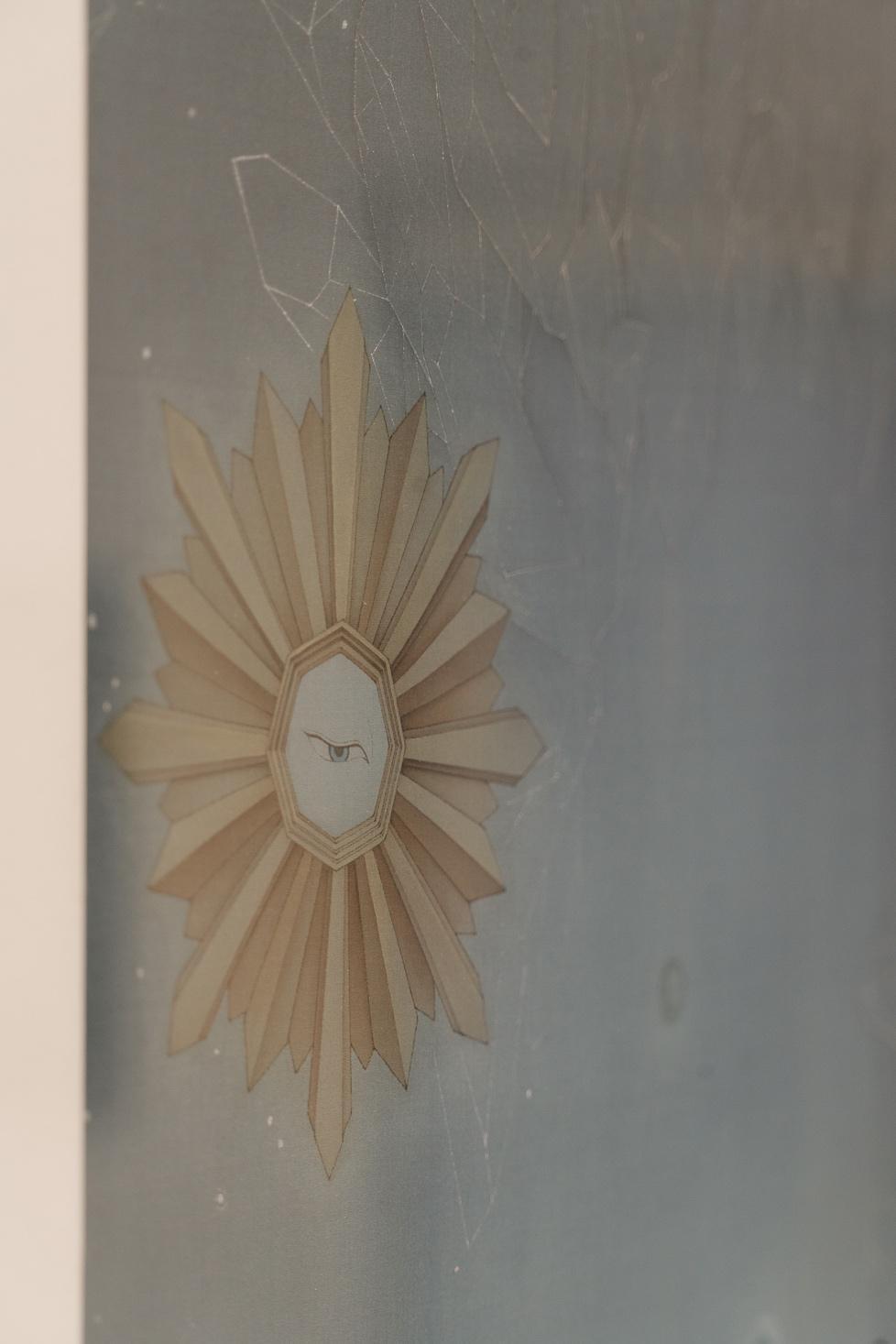 
Zhang Xiaoli’s work revolves around ink wash. Her works combine playful elements such as Lego-built mountains, rocks, and trees, with imagery inspired by occult practices: boxes, handbags, astrological images, and even phosphorous fires lit by medieval alchemists. The imagery vacillates between extremes of vastness and minuteness, with religious elements and mysticism blended in. This surreal yet consistent style can be traced back to the artist's training at the Chinese University of Hong Kong. Although students were required to start with the four basic mediums: Chinese painting, calligraphy, drawing, and oil painting– students also experimented across mediums. Taking photographs in the morning and then woodworking in the afternoon was common practice; while “the standards of each medium were not quite the same, they still all had to be compared together.” Zhang Xiaoli’s BFA thesis was a master copy of an ink wash landscape scroll by Shen Zhou, which at first glance looks like a traditional style painting. Upon closer inspection, the mountains and trees are actually formed by Lego blocks, thus bridging the dialogue with tradition in a light-hearted and witty way. 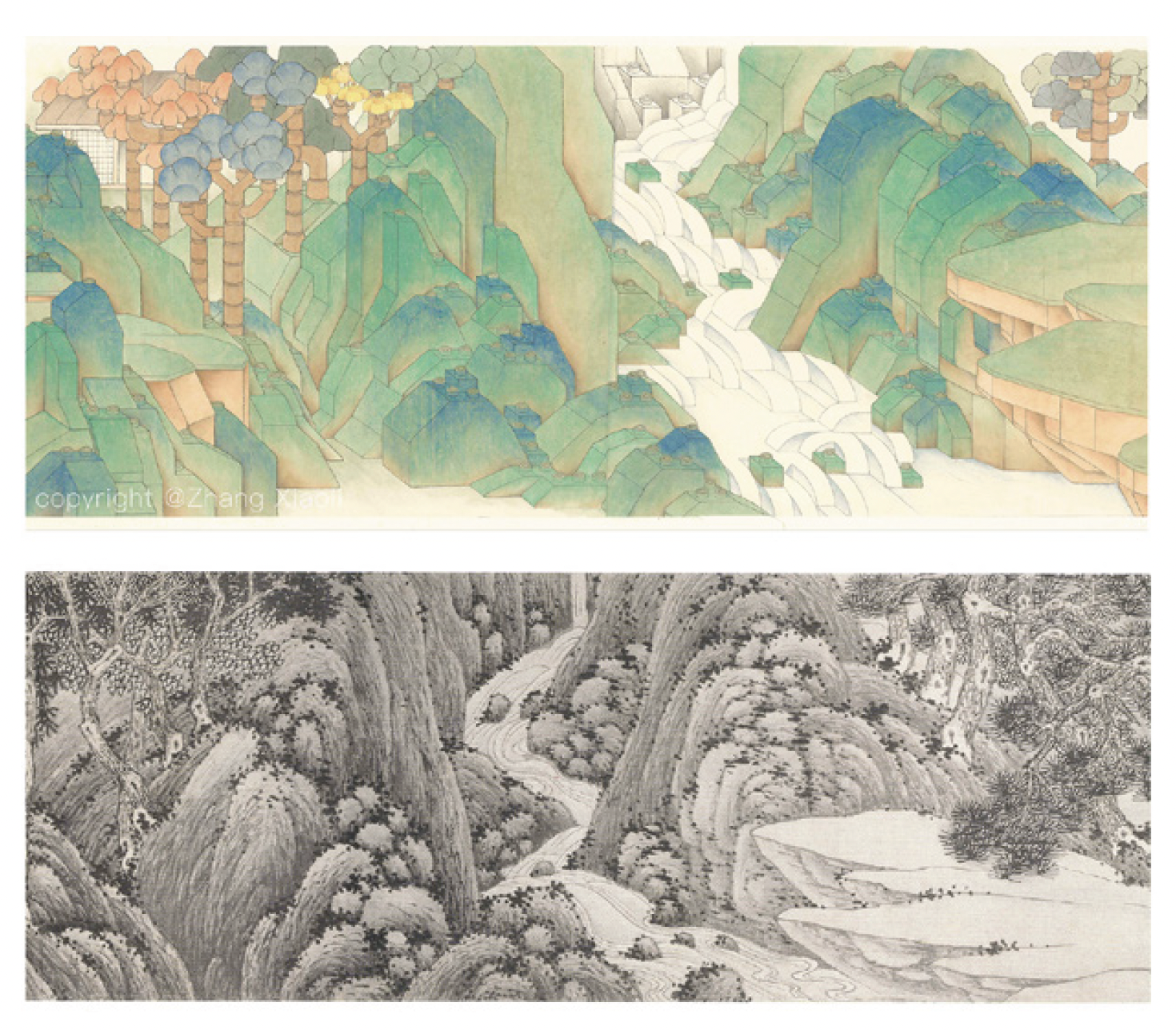 
The ever-changing and condensed urban landscape has also influenced Zhang Xiaoli's practice. She continued exploring the lego theme from “Lego Landscape” in her “Landscape Box” series which put the building block landscapes into different containers, such as food boxes, single-use plastic bags, purses, etc. The landscape is deconstructed, commodified, then reassembled. “The mountains and waters become purchasable, portable, and playable”, in Zhang Xiaoli’s visual shorthand, the chaos and destruction of urbanization are gamified into calm playfulness and curiosity. 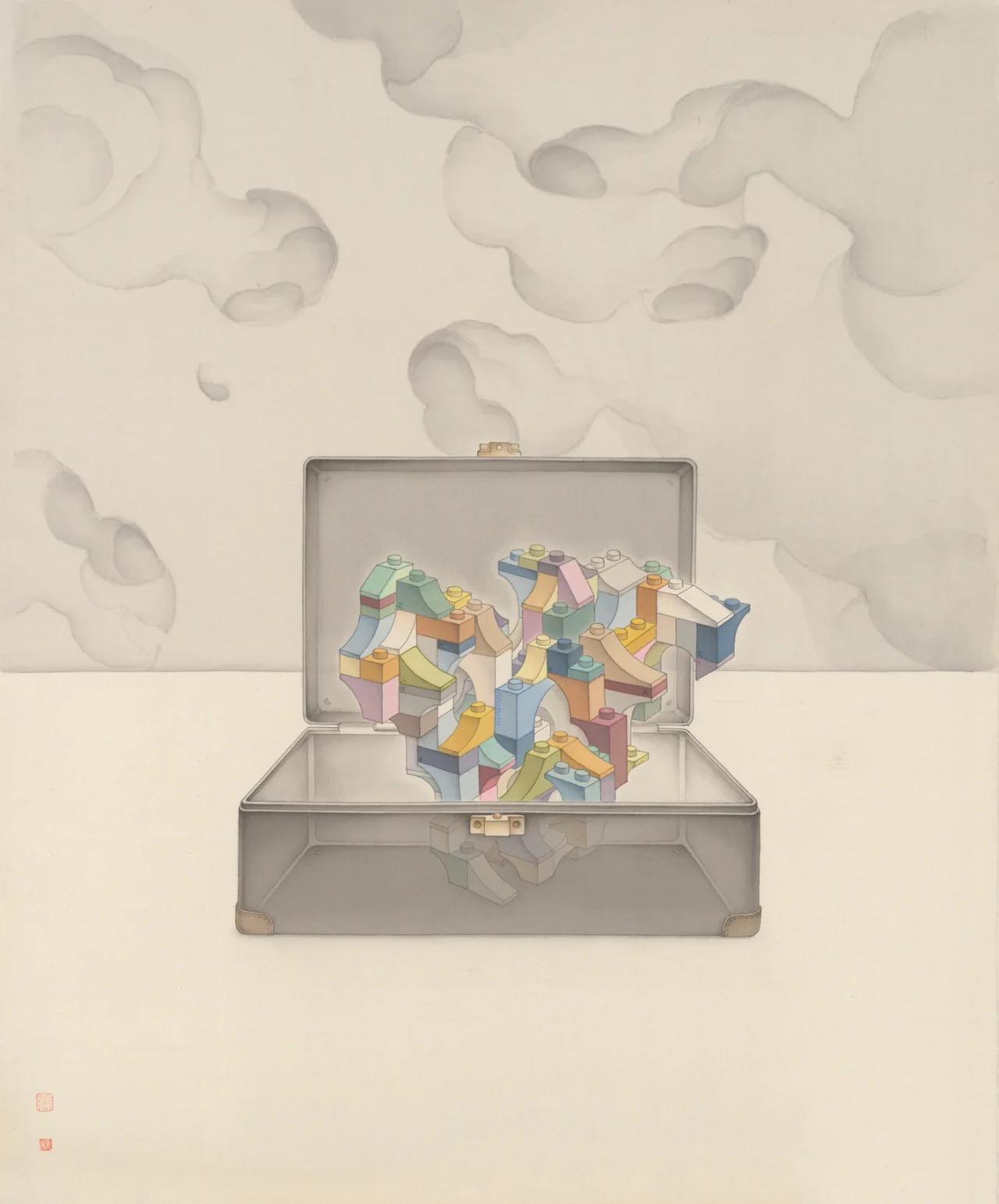 
At the same time, Lego Landscape’s references to games reappear in her later “Kloski” series, where Zhang Xiaoli uses the template of the Klotski puzzle as a framework for her painting. Klotski II is a diptych that explores the game; by replacing modules with elements from different spatial and temporal dimensions, Zhang establishes each game module as an individual world. The rules are stripped down and reconstructed to create new connections and narratives between different modules. On the other side of the work, Zhang uses a more contemporary and abstract visual language, where each plane symbolizes a solution to the puzzle and represents a moment of connection. 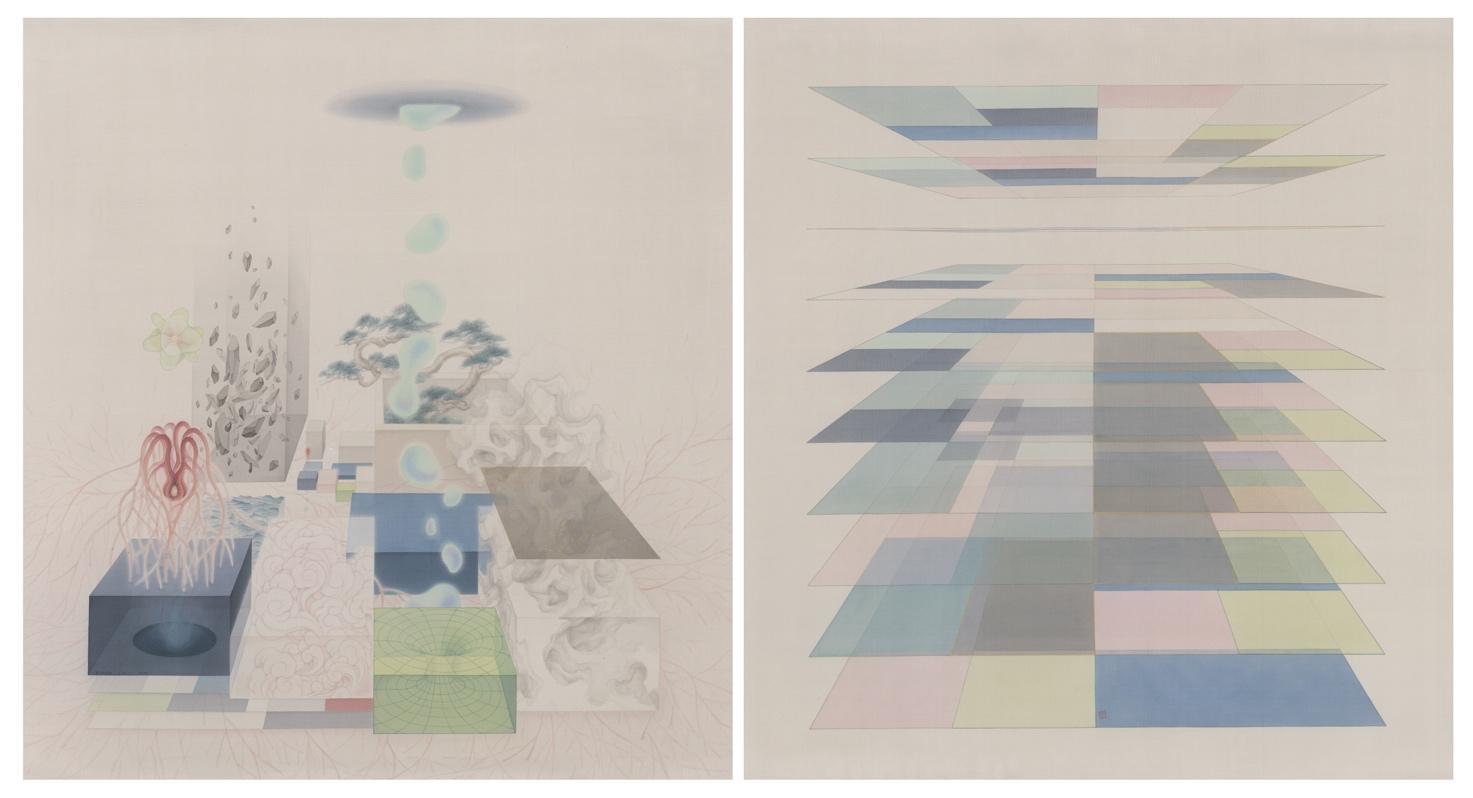 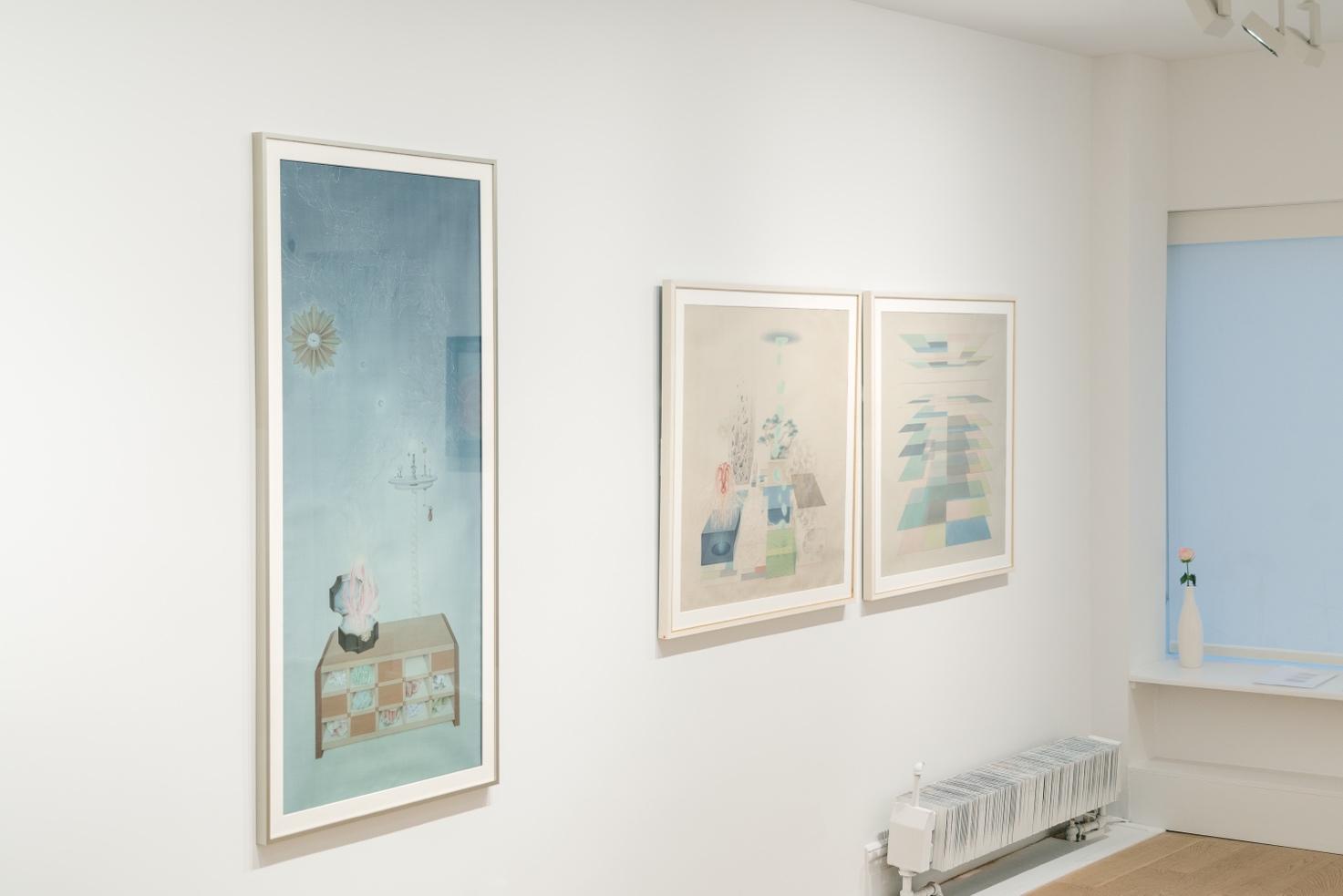 
Expanding on the ideas of boxes and collecting, “Cabinet of Curiosities” (Wunderkammer) is becoming an important concept in Zhang Xiaoli’s creation process. This type of collector’s cabinet was popular in Europe from the 15th to 18th centuries. The cabinet can be seen as a precursor to museums; it was used to display private collections such as antiquities or rare objects. The objects displayed were often artifacts of geography, history, religion, art, and natural history; topics that spanned many interdisciplinary fields. Zhang Xiaoli’s interdisciplinary background also fueled her curiosity about these cabinets where a skull can symbolize multitudes: a skeleton fantasy, a joyful death, or the beauty and poetry of science.


At the same time, Zhang Xiaoli’s “Cabinet of Curiosities” can also contain more abstract and surreal objects. In her work “塔” (Pagoda), she reconstructs the Buddhist pagoda, a symbol of perfection and liberation, in contemporary visual language. Seemingly unrelated objects such as penicillin (which can overcome death and disease) and optical instruments (which can reconstruct the world’s view) are grafted together. As the view shifts upward in the image, coral depicted in a serene dreamland becomes smoke. When the disciplines of different fields reconcile before the ultimate question, everything finally returns to nothingness. 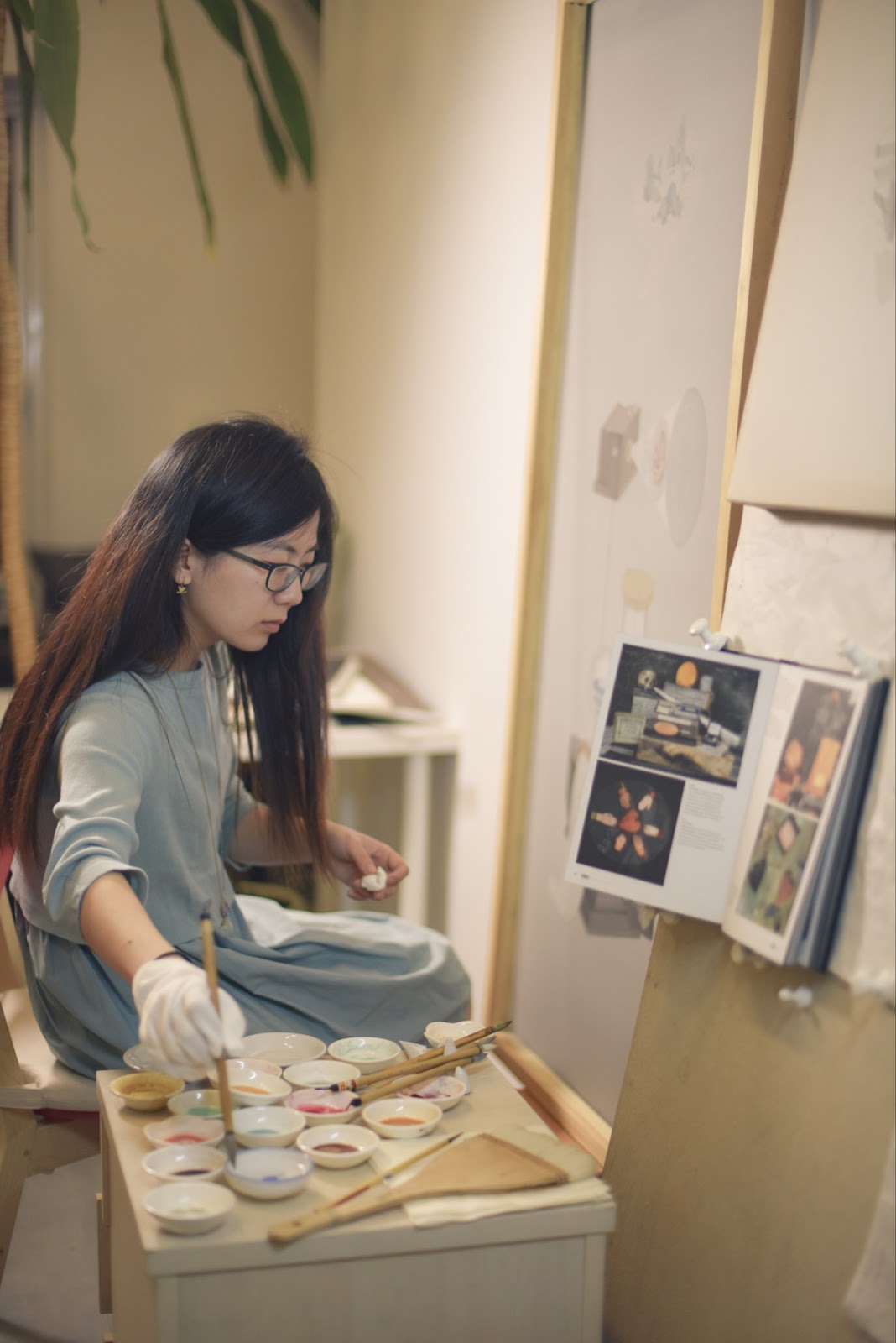 
A：The concept emerged in the great era of seafaring. Owners of a “cabinet of curiosities” who went out on expeditions, or rather based on others' expeditions, were confronted with different geographical cognitive shocks. They collected things from different cultures and ecological environments and, although they might not understand what these objects were at all, would arrange the cabinet display according to their own preferences and collecting interests, as if the cabinet of curiosities was a world of their own making. So  I think the cabinet of curiosities is a loose or subjective way to create small worlds and establish connections between disparate objects.

In our time now, our understanding of the world stems from images and concepts borrowed from different cultures, disciplines, and beliefs which we accumulate over our lifetimes and store in our brains. How each person organizes and constructs this information is like forming a virtual cabinet of curiosities in the brain. What basis of logic and imagination does a person assimilate the different ideologies and stimuli he receives and make them consistent with his own? I am interested in exploring this question with my Cabinet series.


A：I think sometimes only looking from a scientific view is too rigorous and it solidifies the whole system. So I like to connect things that are not related and view them from a different perspective. Just like the “Kloski” series uses a game to connect unrelated worlds, as if a swipe can make a connection between them.。


A：It sort of emerged little by little. At first, I painted some landscape boxes, storing Chinese landscapes in a kind of portable box, which was more related to consumerism. As I painted, I found that the box became more important, and the landscape was not necessarily that important, so I abstracted the objects inside the box, and eventually, the abstraction became a small world. During this process, I became more interested in the act of collecting and would look at boxes and auction catalogs. 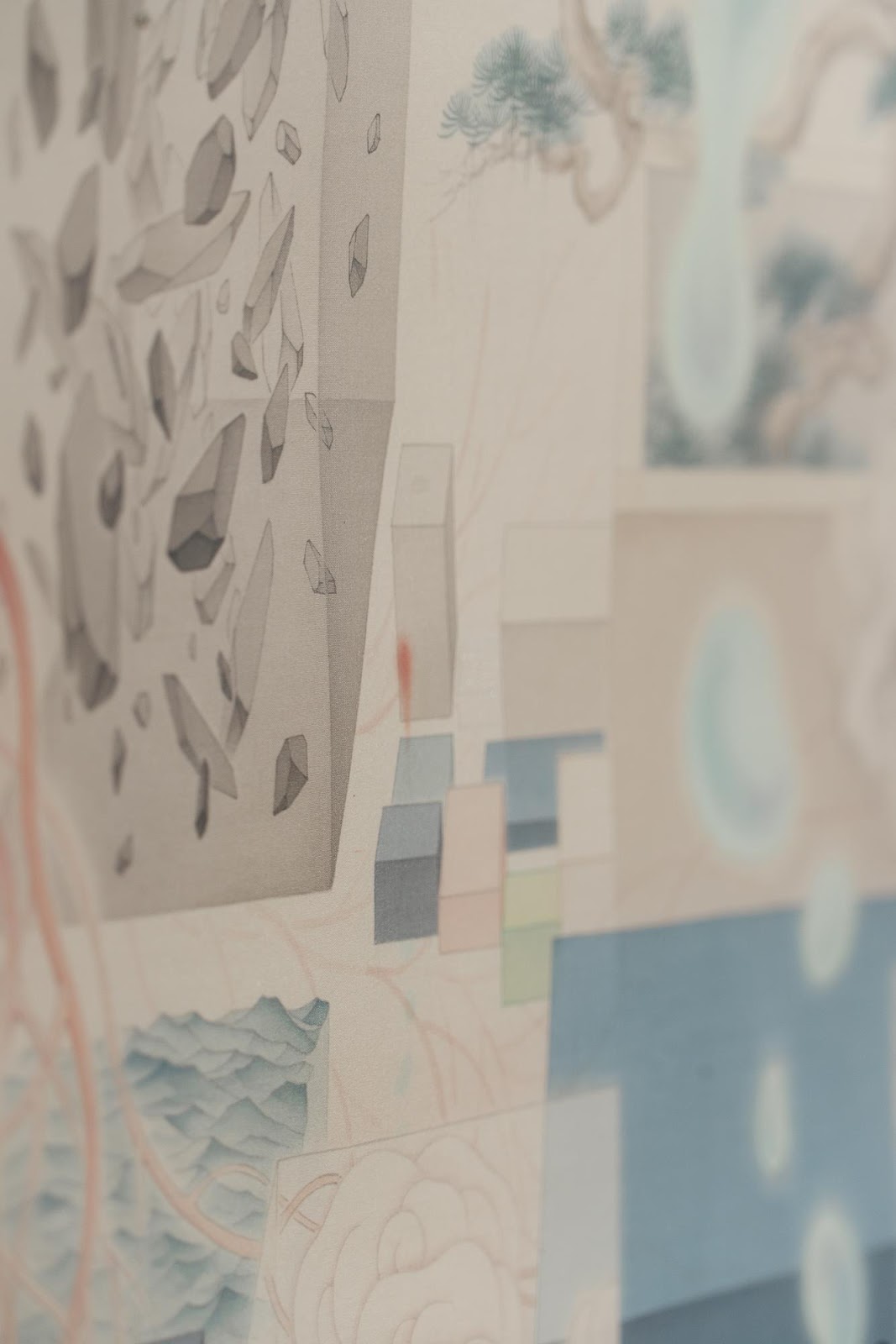 
Then I began to explore the enclosed space and the objects it holds. The container creates space but at the same time creates boundaries and limitations. The objects it contains are fragments that suggest a complete narrative. When several of these boxes are placed together, new connections are created between the fragments to form new narratives. My creative interest is not only in collectible objects. Just as landscape painting expresses the artist's spiritual pursuit, I want to express the spiritual landscape of post-modern people. The post-modern spatial imagination is surreal, with situations that are intertwined, overlapping, contradictory, or circular, which inspires me to paint such surreal spaces.


A：The present moment is actually like this, where the familiar world is sliced, reorganized, and wrongly woven into many smooth worlds outside of the real world: born and then inexplicably collapsed. Constructing a world outside of reality and then breaking free from it is the answer I am looking for in this series of creations.

A：I have been interested in FQM Fine Art in New York for a long time, because my classmates have been working with the gallery for a long time, and I like the artists represented by the gallery. FQM views tradition and ink painting as starting points for artistic practices, which are not limited by the categorization of specific mediums. I would agree with this idea. At the same time, FQM is also doing some interdisciplinary experimentations, which are more in line with my own creative direction. The space’s emphasis on academic research also encourages me to think about what the narrative of Chinese painting should be in the contemporary context. They also have frequent contacts with museums and institutions. If my work can be part of a bigger narrative [of contemporary Chinese art], it would be a great opportunity to show not just my work but the state of contemporary ink art as well. A solo exhibition in New York is being planned and will be shared at the appropriate time. 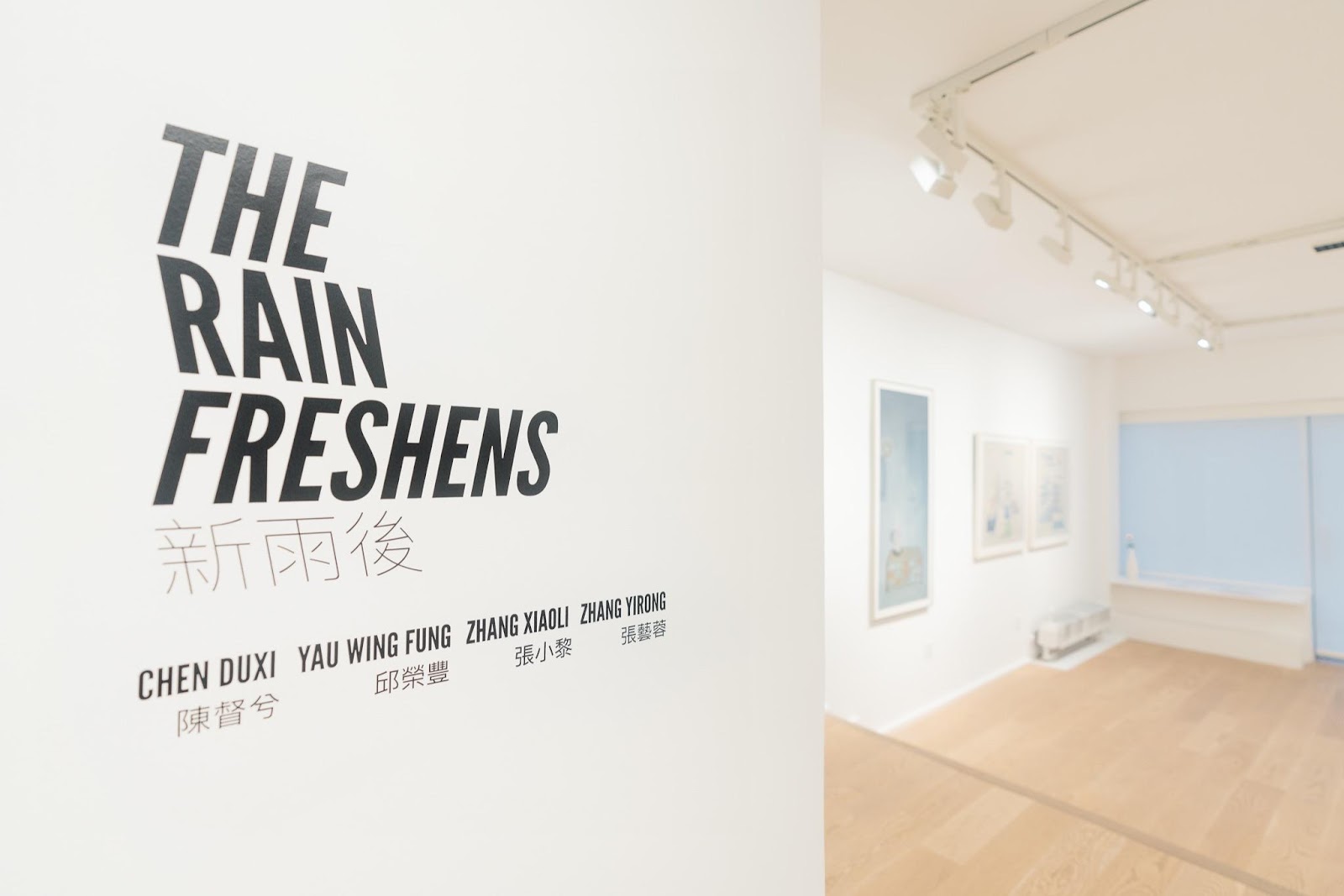 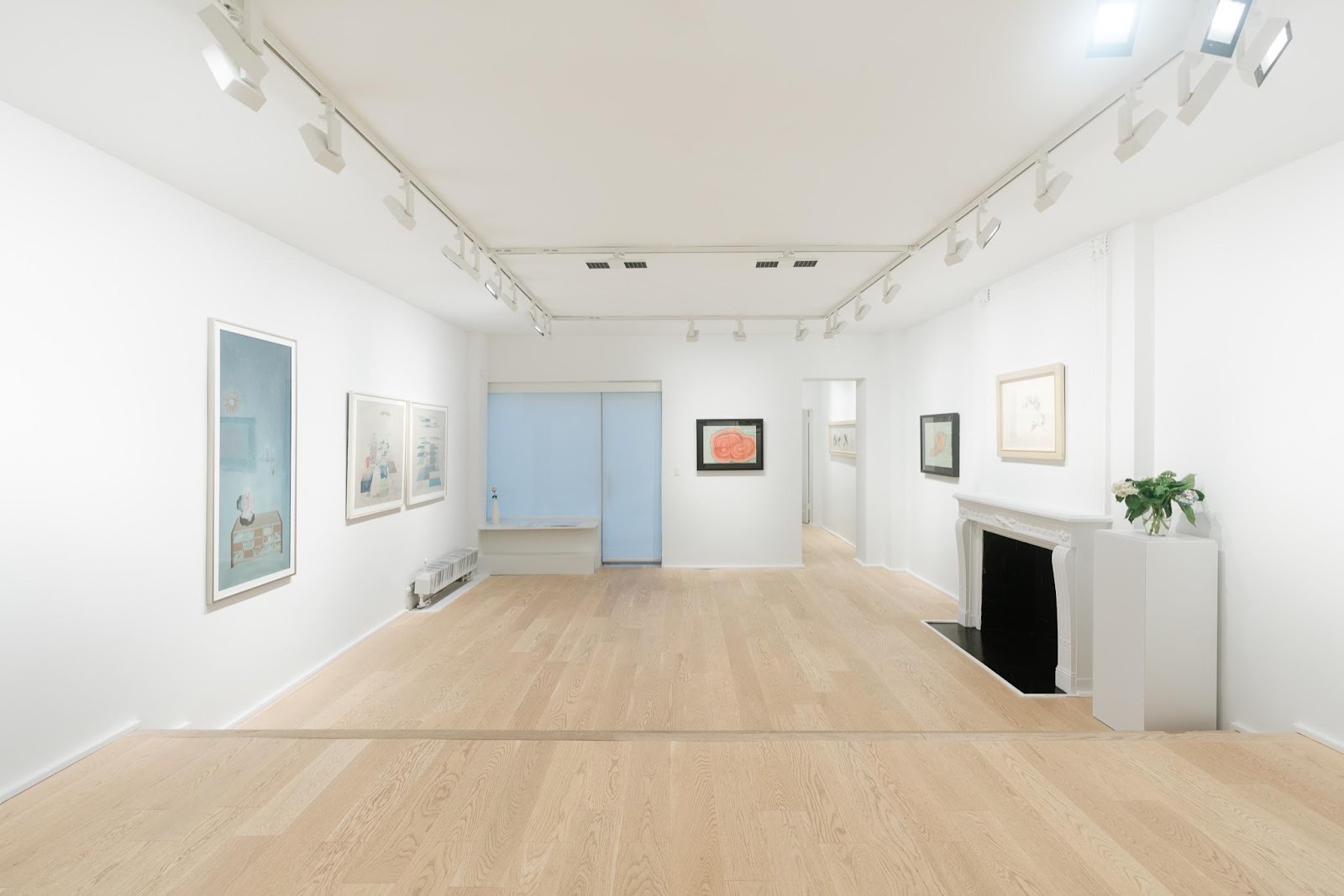